How To Make Montessori Sandpaper Letters

As much as I love the Montessori method, I must say, I don’t love the prices of the equipment, especially if you have to add the shipping fee on top, and so when I started along this journey, I made what I could.

These Montessori sandpaper letters were made in June 2007 and have been on the shelves for a good chunk of that time, we have also used them with various friends that I have taught along the way. Although they don’t actually use sandpaper, they have stood the test of time and are still going strong.

Two reasons, firstly and probably the most important, I made the touch boards for my son and he won’t touch them! I don’t mind using sandpaper but I hate cutting it so that was the secondary reason. I decided to go with sticky felt, the texture is different to the board so it still serves the purpose. I have seen people use glitter glue too, whatever works for you.

Maria Montessori developed the sandpaper letters to help children develop the muscular impression of the letter as well as to introduce the shape and sound of each letter. They are multi-sensory which is important for children still in a tactile stage of development.

Dr Montessori believed that children should learn to write before reading because it is easier.

If a child is asked to write a word, say “cat” he already has a visual image of this word in his head and only needs to take apart the word, letter by letter to reproduce the word.

Reading on the other hand, the child needs to clarify the sound of each letter, one by one and then put each letter together, c – a – t then ca then cat. Before he has combined all the letters together he has no idea what the word can be.

Obviously as his reading skill increase he will instantly recognise some words but every time he comes across a new word, he has the same problem. Although phonics is an important part of the language process, English is not a phonic based language and so children need to be exposed to “sight” words too.

It took me an age to decide how to make them. At first I couldn’t find any pre-cut board the right size so I considered using laminated card instead. My ‘great’ plan was to print out the letters onto the right coloured card (blue for vowels, the rest pink) and then laminate them. I was then going to use glitter glue over the letters to give a textured finish. Luckily, I had the sense to make a test one before embarking on the project, just as well since the glitter fell off after 2 days. Back to square one.

After scouring web groups like the yahoo based Montessori groups (I know, how old school! You guys have it easy with Facebook!) I came up with a fab idea (well, someone else’s suggestion) to use the non stick tread that you use on stairs, she explained that because the glue on the back is super strong it was a great alternative to sandpaper, which I was trying to avoid using. I thought it would be much harder job to actually use sandpaper plus I hate cutting it.  So, off to the home centre I went, only to discover that they only do the stair grip stuff in strips in Japan. Bummer.

Back to square one, again!

It looked like I was going to have to go the sandpaper route when I had a bit of brainwave, sticky backed felt! I remembered it being super sticky, so I dug a scrap out and stuck it to laminated card to see how it was and also to a bit of painted wood. Both were fine but then I decided I might as well go the whole hog and use the boards since I had already bought them. I bought my felt at Tokai craft store, many of the crafts stores and Daiso stock it in Japan, I am not sure about elsewhere.

The finished letters are FAB, the felt is also raised off the board making it more distinct, I didn’t have to cut sandpaper (which is like fingernails on a chalkboard to me) and they have lasted really well.

To make the sandpaper letters….

➻ pink and blue paint (I used acrylic) and varnish

1. Paint the boards (I noticed that a lot of commercial boards put y on a blue board) the vowels go on blue and the constants on pink.

2. Print out the letters. I downloaded the Montessori font, for free here. I like this font because it is kind of between standard letters and cursive. Set up your document so that the page is the same size as the board you will be using. Make sure there is enough space either side of the letter for the child to be able to hold the board firmly.

3. You need to flip the text over so that it is backwards on your screen. Most of the letters I did at the same height but some odd letters, f and j were too long so I had to make them smaller. I recommend printing out just one first to check it is OK.

4. Print out the letters, cut round them roughly.

5. Use the glue and stick the letters to the back of the sticky felt paper backing, if you have got it right, once the letter is cut out it should be the right way

7. Stick to the painted boards (once they are dry).

8. Add a small green dot where you start to write the letter and a small red dot at the point where you finish writing the letter. This will help the child as they learn to trace the letters with the correct stroke order.

9. I also added a small yellow dot to the bottom right-hand corner of each board so that the child knows which way up the letter board should be.

10. Find a suitable box or basket to store the letters in.

This post I walk you through how to present the sandpaper letters.

If you know someone who loves Montessori then please hit the SHARE button at the top of the post.

For More Resources Plus Plenty Of Things To Keep The Kids Busy, Sign Up For The Free Resource Library… 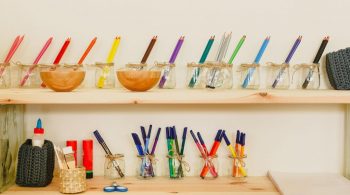 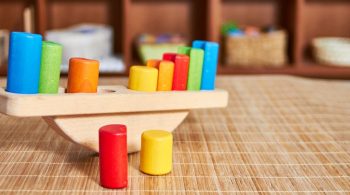